Last week my dad called me, he was updating the bios of his Dell Vostro 3500 laptop when he suddenly got a warning that the battery was running low.  He had the AC plugged in, but still, the laptop just fell out, and the bios update wasn’t finished yet. So he gave me a call if I had an idea how to recover the bios of is old and beloved Dell laptop.

First I thought, that isn’t possible. Never heard of an option to recover the bios of a computer before. But as an IT guy, I am always in for a challenge. After reading on the Dell Community forum I noticed he was not the only one. Somehow it happened to many other users before and there is a recovery option.

While the step below work for the Vostro 3500 and 3700, the same procedure should also work for other models. To get started you need an empty 1GB or 2 GB flash drive. 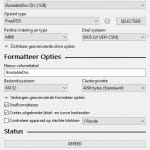 I created a dos bootable flash drive, this should not really be necessary, but my first attempt without it didn’t work. Format your flash drive to Fat32, download Rufus and format the flash drive with the FreeDos boot type.

We now have a formatted flash drive and downloaded bios file. Copy the bios file, A3500_A10.exe to the flash drive. Open PowerShell or Cmd (Windows key + R and type CMD <enter>) and go the flash drive. Run the following two commands to create the hdr and rom file:

If you get a warning “‘do you want to make changes to this device”, then you can safely click yes. It will only create a new file on the flash drive.

Remove the battery and AC power from the dead computer. Plug the flash drive in the second port on the left side. Hold down the End button (not the Esc!) (that was I did the first 3 times… ) and plugin the AC power while still holding down the End button.

Wait a couple of seconds before you release the end button. The recovery mode will start.

Update the bios and reboot the computer.

If the recovery mode does not start, try another USB port.

How to use DISM Command to Repair Windows